I have been lucky to know the wonderful Lou Hamilton for many years and she was one of the key people that helped guide me in my decision to start my own business a year ago. Lou is a hugely talented artist, filmmaker (her short film, Losing The Plot, has just won at the Moondance Film Festival), creative coach and writer and is the creator of the fantastic Brave New Girl.

Brave New Girl is Lou’s hand-drawn character that features in her art work and was debuted in her book, Brave New Girl: How To Be Fearless – a series of more than 100 drawings accompanied by mantras for every woman, young and old, to live by. What is beautiful about this book is that you can open it at any page and be inspired and energised to feel that anything is possible. 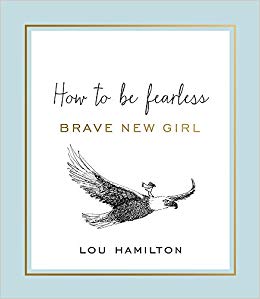 Following on from the success of the book, Lou launched Brave New You  – a hub adding clothing and gifts to the offer featuring the Brave New Girl character.

Lou’s second book, Fear Less, was released earlier this year and is a unique guide to taking control of your imagination, confronting your fears and finding your true purpose. Fear Less works are a self-help guide offering the reader expert advice and a clear path to confidence, creativity and self-discovery and what I love about it is its no-nonsence insight, honesty and experience from Lou herself.

Things are busy for Lou at the moment as she’s busy planning her solo art show Shooting The Breeze which is exhibiting at The Farm in Soho next month.

The show features a series of floaty, ephemeral abstract landscape paintings on textile, stitched with her character Brave New Girl, alongside the main feature of a 9ft triptyc inspired by Lou’s recent filming trip to the battlefields of the Somme and the women that were left behind.

Alongside this, Lou is also finishing a series of poems / “not really poems” focussing on new character, Brave Old Girl, where she talks openly and humorously about her first-hand experience of going through the menopause.

I am thrilled Lou has asked me to come on board to help with these two upcoming events. I am assisting Lou in getting key visitors to her art show including the art press, London press, property developers, and influencers who have an interest in contemporary art and the strong female-angle to ensure her art is showcased to the correct target audience to generate as much interest as possible. Alongside this, and as soon as the series of poetry starring Brave Old Girl is finished, I am charged with banging its drum, generating interest and noise about this brilliant new character. What I am working on currently is putting together a press release celebrating Brave Old Girl to target key titles, radio, television ambassadors and influencers to create as much buzz as possible. Wish list: Woman’s Hour on Radio 4. You have to aim high, don’t you?!