I have been lucky enough to have recently worked with the uber-talented director Sofia Olins on marketing and promoting her amazing film, Lost In Vagueness. 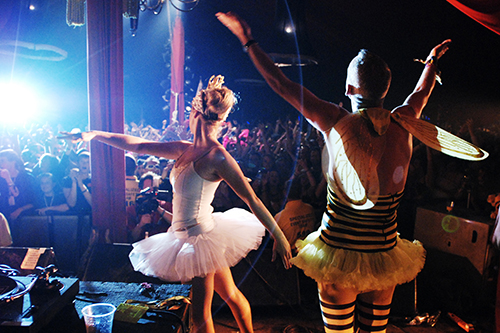 The film tells the behind-the-scenes story Glastonbury’s Lost Vagueness and how creator Roy Gurvitz, together with Michael Eavis and a band of new-age travellers, found a new British cultural movement by coming together to create a place of opulence and decadence reminiscent of a permissive 1920s Berlin – all in a muddy field.

Lost In Vagueness captures and celebrates some of the most risqué performances of the time, alongside exclusive interviews with Michael and Emily Eavis and live showcases from Kate Tempest, Fat Boy Slim and Madness.

The film explores the dark nature of creativity and was a labour of love by Sofia taking 12 years to make. It not only celebrates Lost Vagueness’s amazing heyday but also documents how the anarchic party eventually unravelled in spectacular style in a showdown between Gurvitz and the Glastonbury organisers in 2007 – all to a soundtrack including Alabama Shakes, CW Stoneking and Beck.

I came on board as Sofia was gearing up to premiere the film at the Sheffield Doc Fest and I worked with Sofia and team to promote and market the film. This was followed by an exclusive screening in south London featuring cabaret artists and DJs from the era which I am happy to say sold out. In support of these activations and to promote the film, Sofia was interviewed by The Guardian, Hearst Empowering Women and BBC 6 Music and hosted a special screening of the film at this year’s Glastonbury.

There are still more screenings, partnerships and parties in the pipeline to celebrate this wonderful film and very special moment in time and I’m very happy and excited to continue to work with Sofia on these – watch this space!